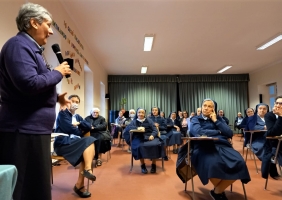 On October 30th and 31st, the new Italian province comprised of Pinerolo and Italy held its first provincial assembly. The aim of this assembly was to start sharing about the current Constitutions of Chambery approved on March 19, 2017 for the sisters who were in Pinerolo so that they may be familiar with the constitution and encourage the sisters to become more committed to live as a leaven of unity in the world. We felt that it is necessary for the Sisters who have merged with Chambery congregation to have an opportunity to identify themselves with the constitution and be faithful to the charism of communion.

Realizing this need, the Provincial Council proposed an assembly and held the in-person Assembly for the Motherhouse of Pinerolo, and via Zoom platform for the Sisters of the South Centre, Argentina and Brazil. The program included history, structure and content of the constitutions of both the congregations and a more specific intervention on the first three topics of Part I of the text approved 4 years ago, namely "Our life in the Congregation", "Nature and Purpose" and "Mission and Ministry". Sr. Maria Rita Bollati, Sr.  Clementina Copia, Provincial, and Sr. Maria Cristina Gavazzi gave the input sessions.

"BEGIN A NEW PATH OF UNION"

The group work was very rich and fruitful. There are a number of practical questions and issues that the Council will have to consider in order to move towards effective integration, transformation and conversion.

On September 25, 2021 during the celebration of fusion in Rome, Sr. Sally Hodgdon - Superior General said: “Fusion is not the simple disappearance of one group into another. Nobody is disappearing! In a merger, the two groups undergo a change. None remain the same. A new path of union begins, in which we are all encouraged to renew ourselves. [...] Life cannot be the same as it was two years ago. Now we are a new group of religious on the way”.