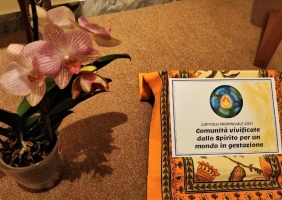 After seven online sessions, from June 21st to 23rd, the 18 chapter members of the Sisters of St. Joseph of Chambery of the Italian Province had an in-person meeting in Rome for the election of the new Provincial Team. We had the grace of having Sr. Sally Hodgdon, Superior General and Sr. Mariaelena Aceti, General Councillor in our chapter. The Sisters were called to discern the voice of the Spirit which subtly and almost imperceptibly vibrates among the sounds, voices and noises in each one's heart.

Sr. Sally in her opening address said “In January, when you began your Provincial Chapter, I concluded my speech encouraging you to identify yourself with your chapter theme: ‘Communities animated by the Spirit for the development of the world.’ I said that you are women; a courageous community, animated by the Spirit to do the mission entrusted by God in a world of constant development and growth! This is still true. The growth of our world indicates that there is a great need for people like all of us, who are willing to take risks and denounce publicly everything that is unfair and unjust to build a world of compassion and equality"

Together with Sisters from the north of Italy, connected with us via Zoom platform, and the Sisters from the former Pinerolo congregation who are accompanying the chapter with love and prayer, we hope to make some decisions which will reflect the courage to follow Jesus without fear of taking risks.